Waking on the Thursday to the pitter patter of rain on the roof of the bus we took the decision to drive over to Bridport and the nearby West Bay, planning a cheeky photo of my Westy by the sign for the town ‘West Bay’ and a days fishing on the Quay. But after fighting through traffic all the way to Bridport, we found the road to West Bay closed due to a serious road traffic accident, and had to head away in the opposite direction rather than fight our way back through Bridport. Before we knew it we were on the road to Honiton and had past the county sign for Devon, and seeing we were not booked in to camp anywhere that night and feeling like free spirits we headed into Devon, then Somerset, and back into Devon again, sticking to country lanes and enjoying the drive and the sights of the English countryside. Stopped for Lunch and Sabine enjoyed her first ever plate of Mussels.

I had been in contact with friends who had invited me to a Ska party at a surfers campsite in St Mawgan Cornwall, so we decided to make a nice drive down to finish the day off, so we set off through Somerset and Devon. Hit the A30 and soon after Exeter the skies got darker and darker then we drove into the storm, rain so thick visibility was down to a few meters, and lightening was crashing all around, the van started to aquaplane on the surface water and it was as much as i could do to hold the bus on the road! We kept going and it was Bodmin Moor before we came out the other side of the storm. 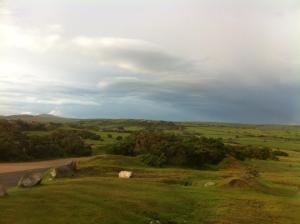 I think the photo below demonstrates the darkness of the storm in front and the daylight we were leaving behind.. crazy!!

Then we had to Find The Retorrick Mill Campsite in St Mawgan, wich is not on a main route, B Road, or a country lane , this was down a farmers track of a lane off a country road, and as we are old skool and dont use a navigations device it was a job and a half and several stops to ask the way. Finally at 9pm in the Evening we pulled into the Mill, to find the campsite was in the middle of a party night and that the bus wasnt going over the ford into the campsite, but the super friendly owner Wilf made a space for us , so it was time for a well earned cold beer and a seat around the campfire.