It was an other bright and sunny day, when we’ve left quite early that peaceful place aside the small lake. We’ve got ahead quite fast cause when we’ve left the track after a few kilometers, we’ve driven on fast lanes only up to Trondheim. 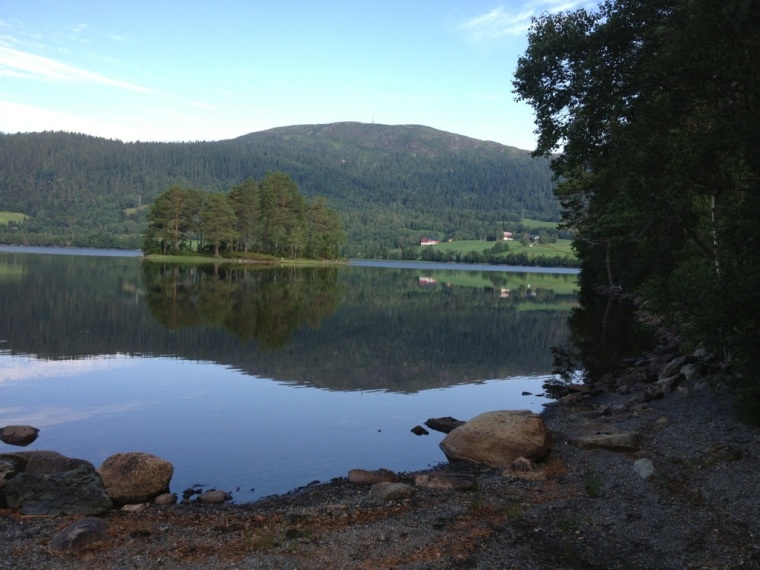 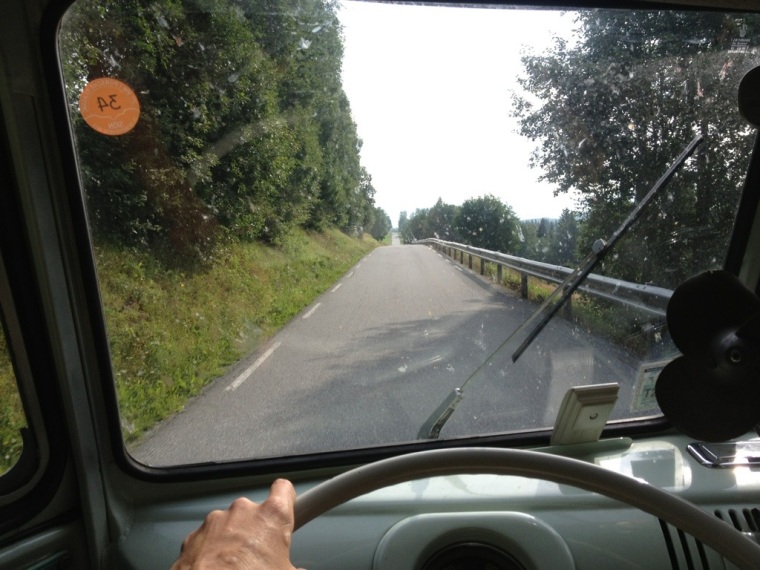 When we’ve arrived in city center half past ten, there was still some time to visit a coffee bar and fulfill the bug wish of Julian to get some real food at McDonald’s – so finally after a long week, he get something real between his teeth. 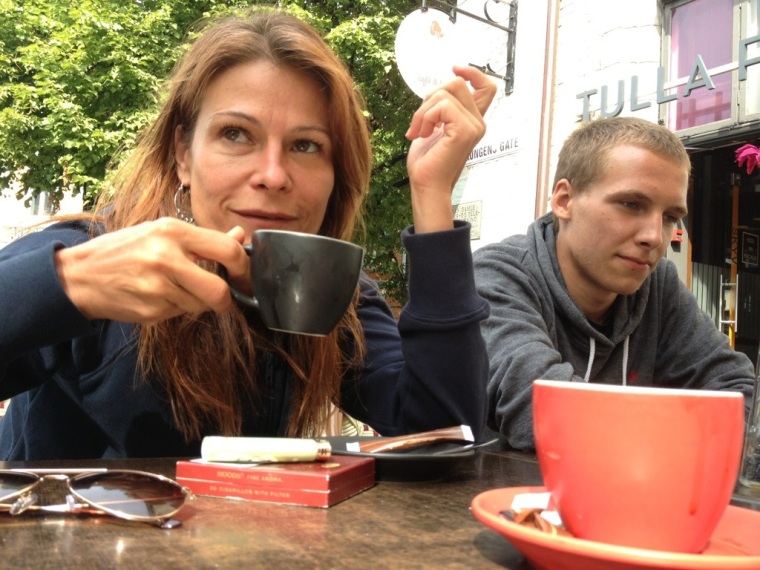 We’ve finally dropped Julian at Værnes airport at one o’clock. When we’ve driven back to Trondheim, we’ve done a brief stop to watch the starting plane of Julian, before I’ve rang Felix, a Swiss friend back from my Childhood, who has emigrated ten years ago to Norway. We were welcomed by him, his wife Silje and my Godchild Agnes at their place at half past two. They are living in a very nice neighborhood only a couple of meters away of the beach at Lade. As weather was still bright, we’ve spent a nice evening at their balcony by eating some awesome Homemade Tacos.

On the following day Bettina and I did sightseeing by ourselves in Trondheim. It’s really a very, very lovely and nice town with its mix of old an new architecture, its historical parts, especially the Cathedral and all the nice small coffee bars to sit outside and enjoying this exceptional summer. 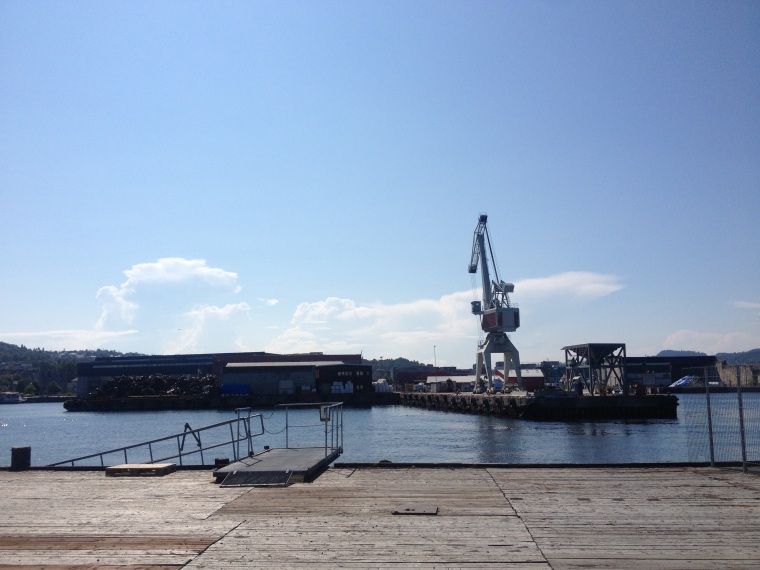 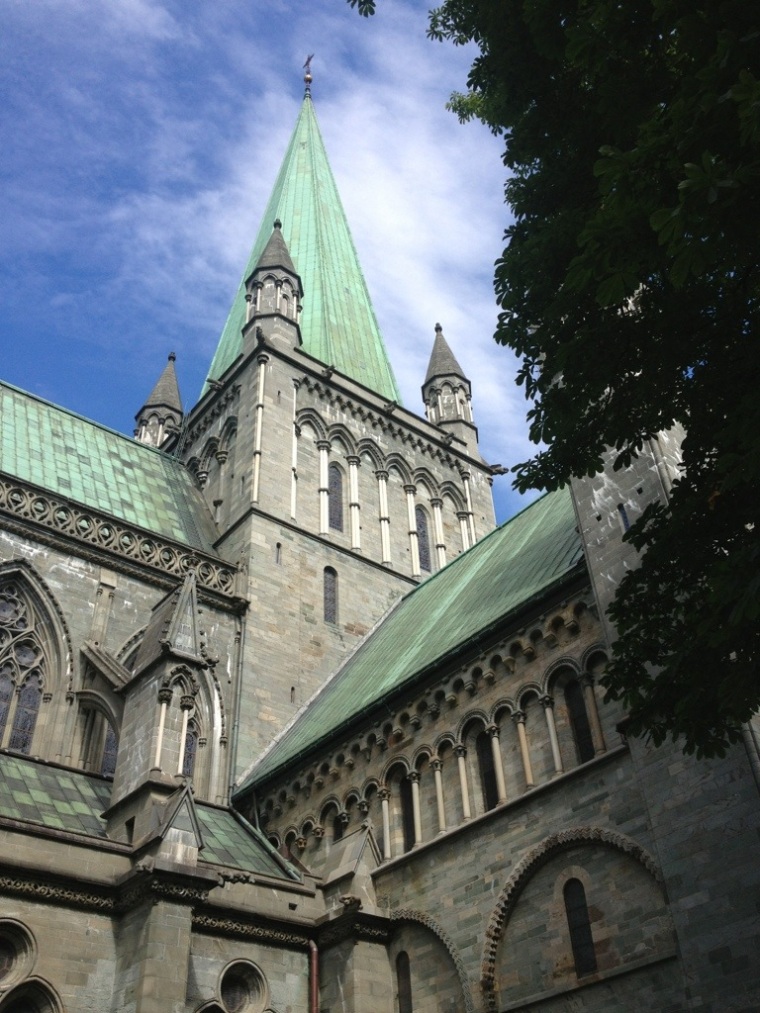 After Dinner Felix and me have decided to go on a boat trip on the Fjord by his Collapsible boat, which his father bought back in the sixties. We have driven it the few meters down to the beach on a small boat trailer and pushed it into the water – awesome to live such close to the sea! It was a quiet and very lovely trip to the dawn. 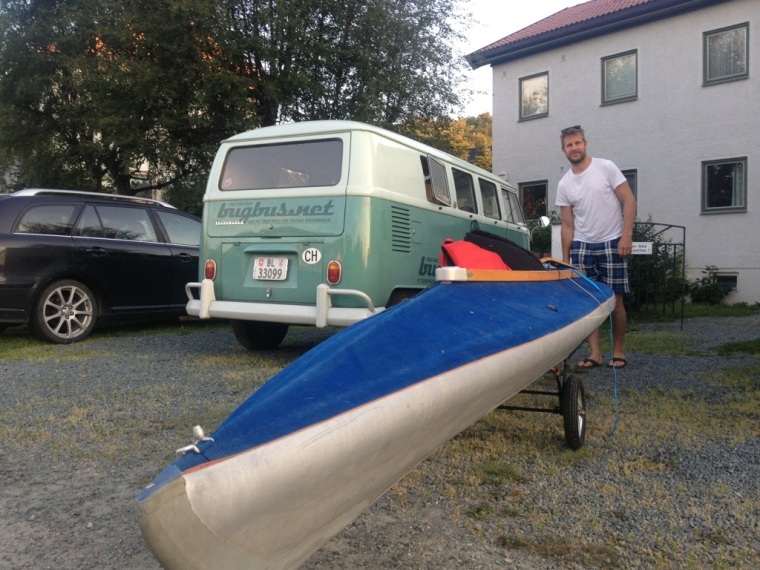 Sunday was the first Birthday of Agnes. After a long breakfast, Felix, Silje, Agnes and me have spend the day at the beach, while Bettina wanted to stay at home, cause she suffered from a bad headache. There also arrived Agnes Grandmother and her Uncle with his girlfriend late afternoon and we’ve had a nice Birthday dinner.

On monday after breakfast it was time to say goodbye. A bad thing was that Bettina’s headache has been still there – I’ve already suggested to go and find a doctor, but she denied. Finally we’ve left Trondheim after helping Felix by changing the door of his caravan around one o’clock. 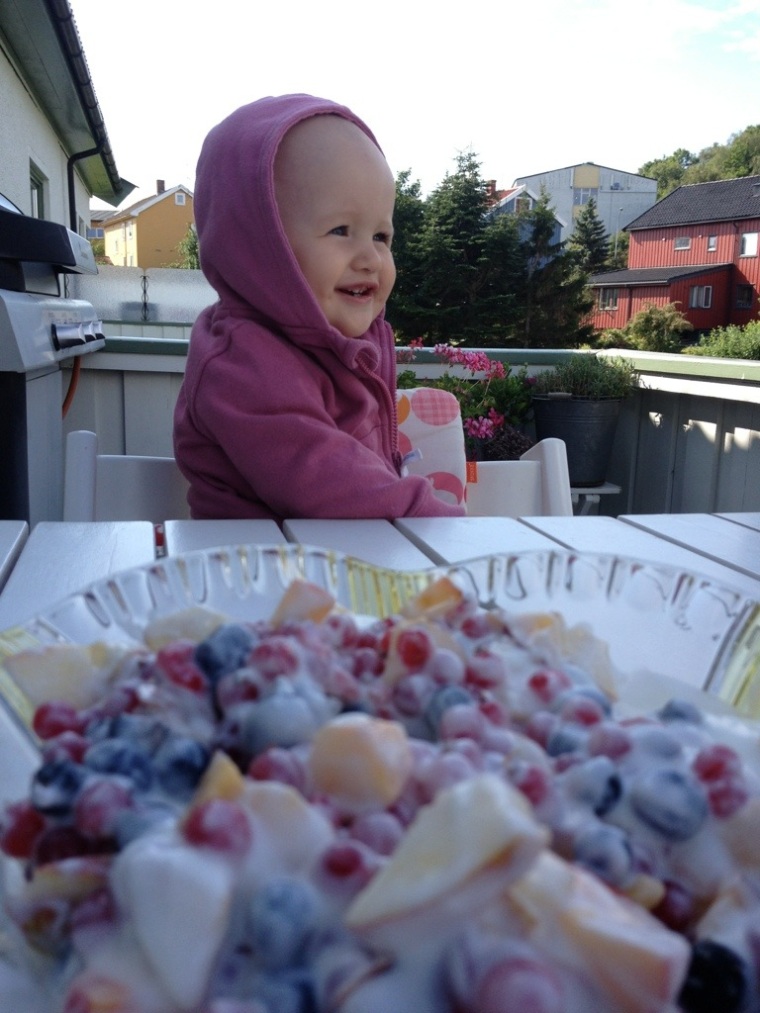 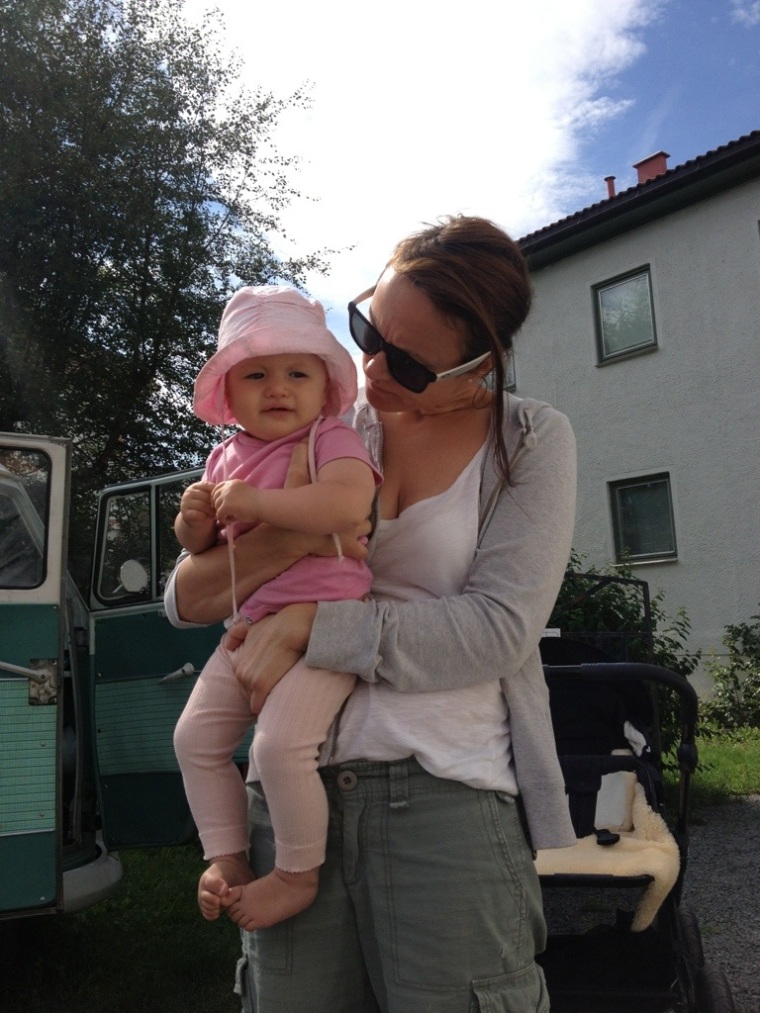 Our today’s goal was to reach Stokkøya, a small costal island north of Trondheim. We’ve took the 715 to Flakk toget the Ferry to Rørvik, where we’ve kept following the 715 upto Åfjord. The weather became very cloudy and it seamed to start raining soon. After a shopping stop at Kiwi in Åfjord we’ve continued our trip to Stokksund and started to search a nice spot to overnight. We’ve found that spot right after passing the bridge to Linseøya. As the weather brighten up, we’ve spent a very nice hour by eating and having a can of beer before a invasion “Knots” (Midgets) over ran us and we were forced to escape to an other, not so nice – but less Knots frequented spot on the other side of the bride. 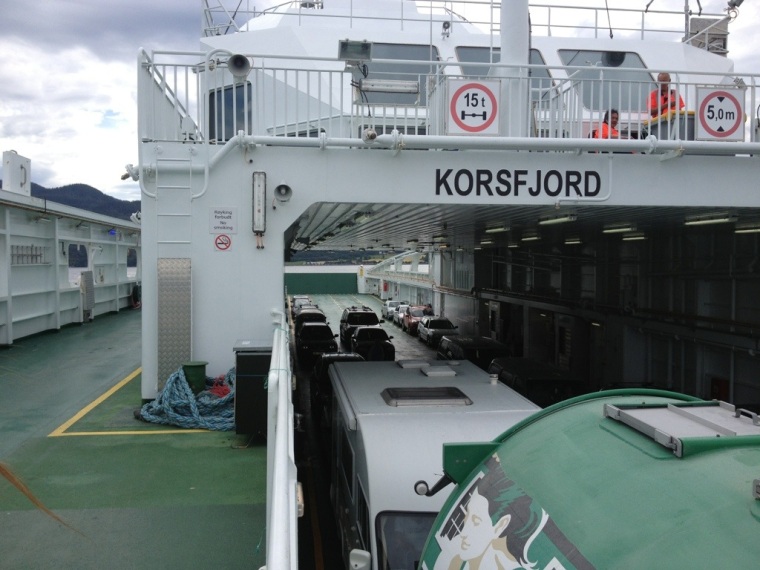 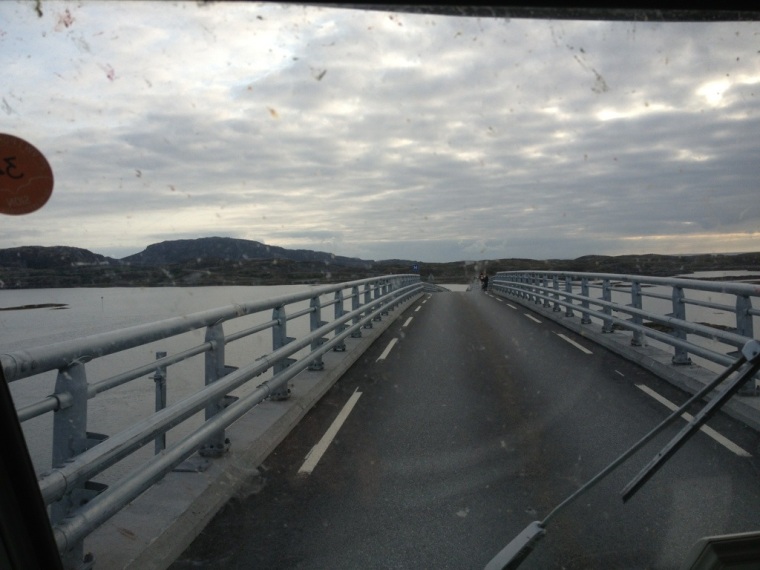 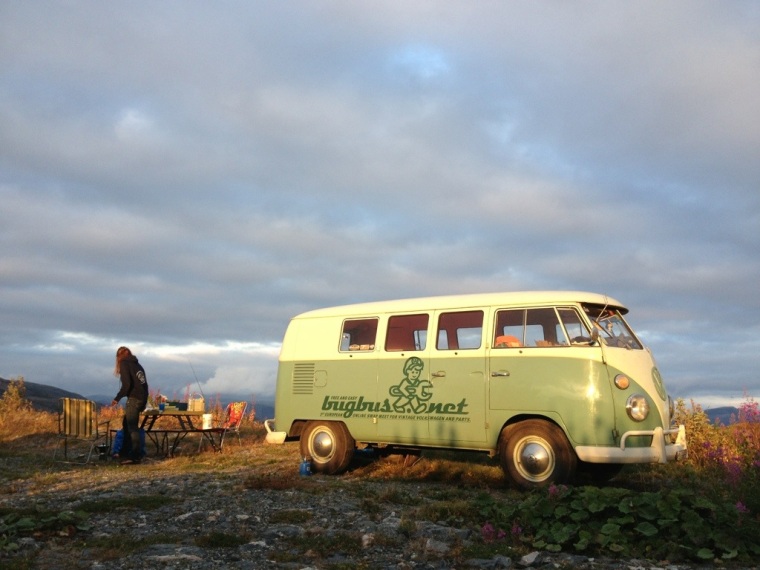