We must have slept for hours. It was the drivers that got up first to check on their rides. I inspected my car and found nothing wrong except a missing tail pipe and a few small dents and dings on the rear fender. Billo rides low…not too low but barely stock height. That was great when cruising along North American roads but the track we travelled on in the past few days was pure torture. I found the carpet mats in the car a bit soggy so I removed them all and lay flat to dry in the searing Gilgit heat. They were dry in no time. I brushed loose dirt off and placed them under the hood. For the rest of the trip I’ll be driving without any mats. 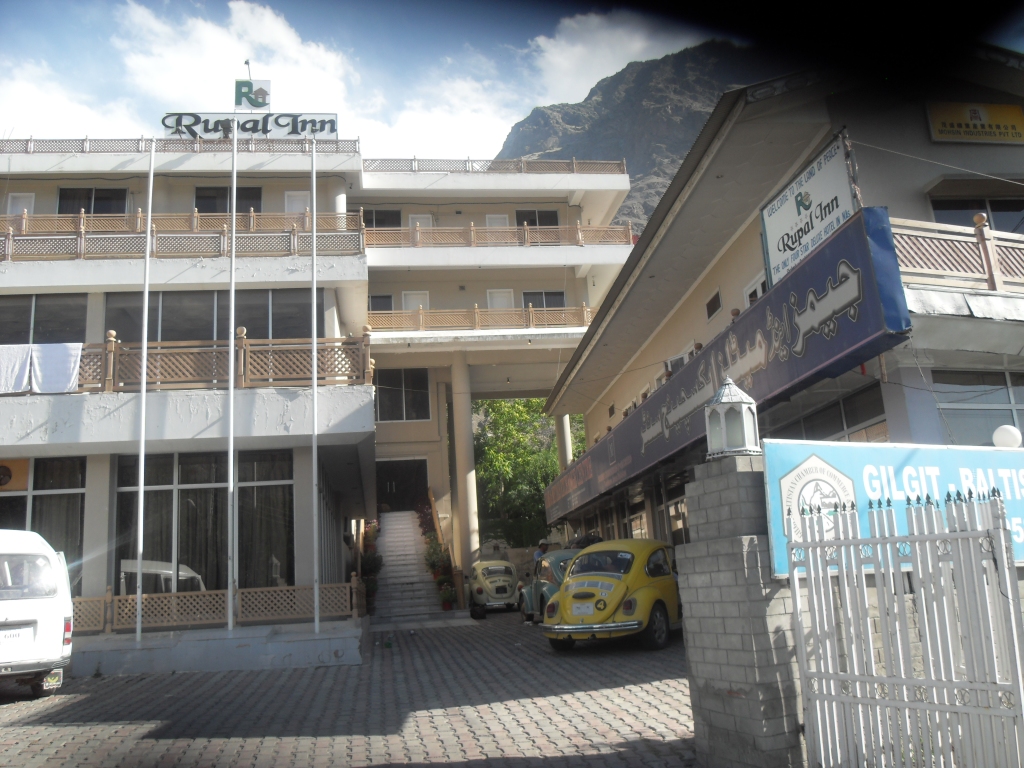 Taking advantage of the hot sun and gentle breeze, drying out Billo’s interior 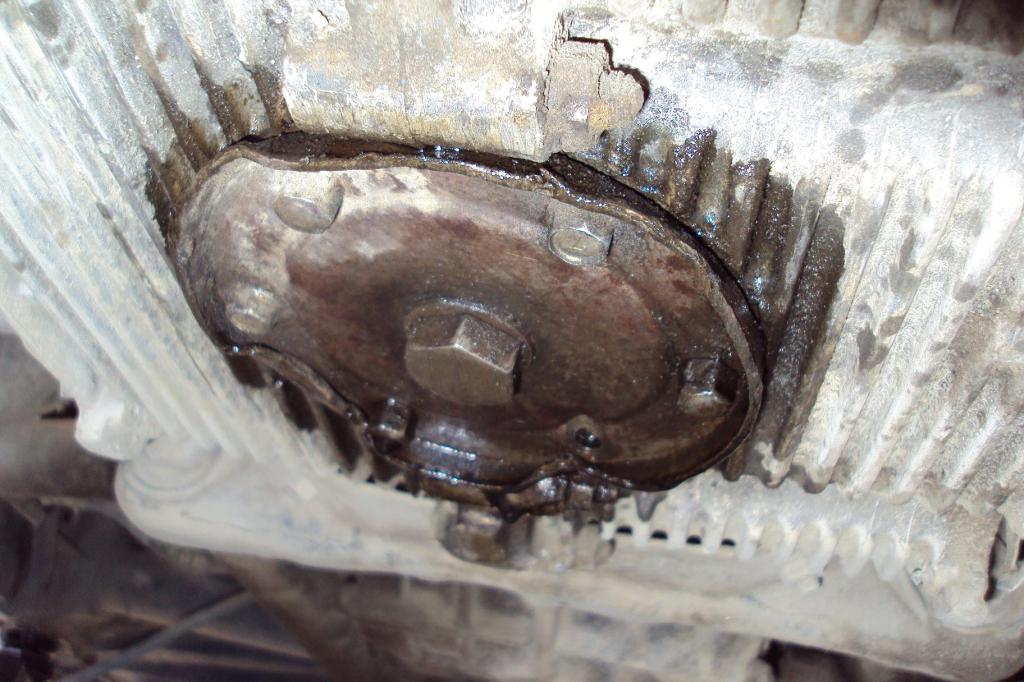 Ali Zafar’s Vanagon who had just returned after doing ..this (see next picture)

Everything wasn’t hunky-dory for the other drivers. Mujeeb’s Grey matter had hit or scraped the engine bottom on a rock and the drain plate was all but pulled off the crank case. No wonder she was leaking that much oil. luckily we had a complete spare engine so we just took the drain plate off it and replaced the badly damaged one on the car. I pulled the tail pipe off the spare engine and replaced the one that had gone AWOL. After the replacement Billo began to sound more like her old self. I pumped some fresh grease in the front suspension and it made a heck of a difference. water oozed out from the sides of the front beam as I pumped grease. I guess wading thru those streams could not have been without any effect.
Maqsoods was the only car that required repair work at a workshop. The super ‘limped’ bravely to the facility where the broken sway bar was removed, welded and re-installed under the supervision of the rally mechanic. The wonderful gentleman at the workshop refused to accept payment saying that we were guests in Gilgit and he was happy to be of service. While we waited for the work to be done we enjoyed the fresh local cherries.
Two of the cars had shattered headlamps but the bulbs were still functional so decided to leave them be. We were briefly joined by another club member who was traveling alone in his Vanagon. We quickly compared notes and stories and got ready to leave for Karimabad Hunza.
Gilgit is the capital city of the Gilgit – Baltistan area (also known as the Northern Areas.) It has its own airport that can only accommodate small aircraft. I have flown out of this airport and it was one when your heart jumps to your throat. No sooner than the nose wheel of your aircraft clears the runway you are flying in the valley with high mountains on both sides. You hate to think what would happen if the aircraft lost power in those critical moments. The landing is no different. The pilot maneuvers the aircraft through a small corridor  and the short runway at his disposal ends directly in the main market of downtown Gilgit. There is also a 5 star hotel but we were on a budget and short of time so a visit this once was out.
There are plenty of good fuel stations in Gilgit so we tanked up on our way out. However the same cannot be said about the roads leading out. They were as torturous as the roads into the city. You see the city of Gilgit is about 10 km off the KKH. While the KKH itself is in shambles, the road connecting Gilgit to the KKH is worse. They have carved a detour that takes us down to the raging Gilgit river, across a steel bridge and then back up to rejoin the KKH. Gilgit receives very little rain (about 5-10 inches annually) so it was quite hot and dusty. The combination is super irritating as the dust sticks to the moist skin and it feels like your shirt has a sandpaper collar.  Once we reached the KKH it wasn’t all that bad. Infact we had the best run of the trip as the road we drove on was brand new. We pressed the pedals to the metal to cover the distance before it got dark. The routine of one car taking lead to take pictures of other cars as they drove past was followed but we did brake to take group pictures and to fill up our water bottles with fresh and ice cold spring water. From here on we were drinking water that was as pure as it gets..real mineral water and in abundance. The black topped road soon came to an end and the under construction road surface was left to tackle in failing light. Fortunately the road surface was mostly at a stage just prior to black topping so not too painful for the cars, drivers or passengers. 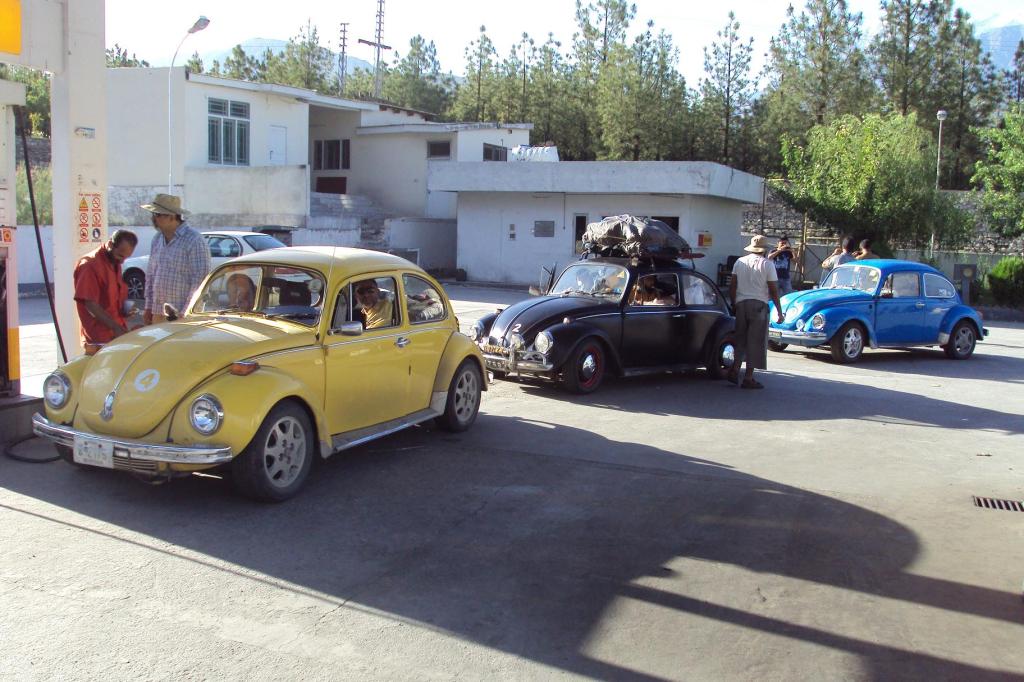 Refueling on our way out of Gilgit 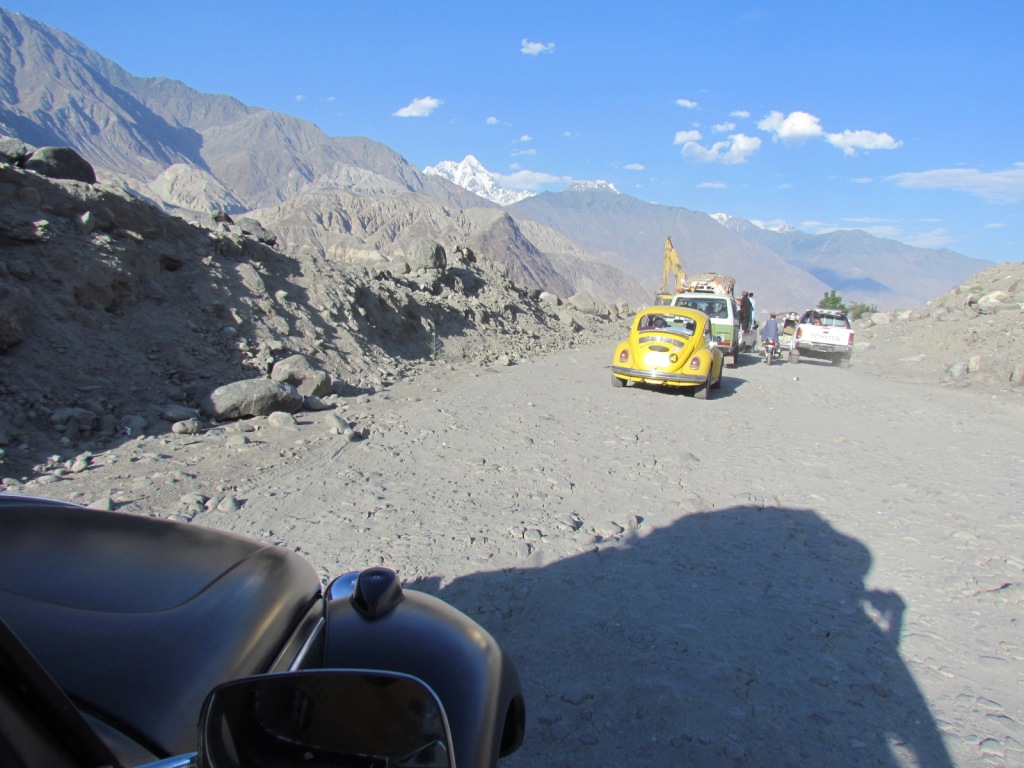 the moonscape before we got back on the KKH

more of the same

We arrived in Karimabad with is a dreamy little town of Distt Hunza (More on Hunza later) and checked into our hotel. The hotel kitchen had closed down for the day but I had arranged for dinner at a very exclusive place called the Hidden Paradise. The restaurant has a large menu (more than 80) of exquisite local dishes that are prepared to order. One of my personal favourites is the ‘Hunza Pizza” called the ‘Chapshuro’ in the local Shina language. Had it been during the day we’d have enjoyed along with the excellent food some breathtaking views of the valley too but everyone was too hungry to miss those and rushed back to their rooms and crash for the night.

5 Comment on “The Goodwill Expedition – Karimabad Hunza, end of Day 3”