Along the way we passed the dreamy garrison town of Abbottabad… Don’t tell me you haven’t heard of Abbottabad? It is the place where the alleged perpetrator of 9/11 Mr. OBL was hiding all this time. We have unconfirmed reports that Osama used a VW for his trips around town. We couldn’t of course confirm these rumours as the man in question is swimming with the sharks about 1700 km away in the Arabian sea.

We stopped in Balakot for refuling and it brought back memories of my visits to this place in October 2005 after the deadly earthquake that claimed lives of more than 85,000 people , about 35,000 of which were school children. The whole town has been rebuilt even though it sits smack on the fault line and future earthquakes have been predicted. I did notice that most of the newly constructed structures were more ‘earthquake friendly’ than before.

Balakot – a day after the October 2005 earthquake

Fuel stop at Balakot as it looks now

The next major town is Naran which is a popular tourist attraction. It took us better part of an hour to get across the town due to traffic snarls and pure rush. We had planned to reach our campsite before dark but as we were all men in the group and we don’t ask for directions we missed the campsite turning and drove on for about 5 km only to realize and return. (reminds me of a joke I read somewhere..Q. Why does it take a few million sperms to fertilize one egg?  A. because they won’t stop to ask for directions.) 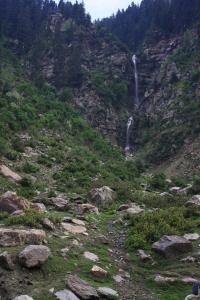 We came across numerous waterfalls, big and small, along the way.

One of the many stops along the way to take pictures. 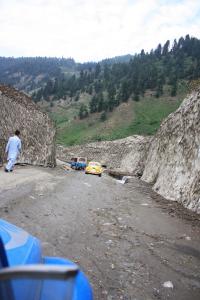 road carved out of a glacier as we approach Naran

Our campsite was a helipad right next to the noisy Kunhar river. I was secretly hoping there would be no helicopter landings that night wondering if we would hear one approaching over the sound of the water crashing against the rocks in the river. It was a night with full moon and the beauty of the area was surreal. Our cooking team got to work immediately as others pitched tents in a semi circle. The toilet tent was located at a short distance to save the others from the sounds and smells but there was heavy traffic to and from it till everyone had wolfed a hearty meal of rice and chicken prepared by Chef Jehangir and team. 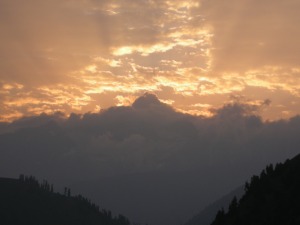 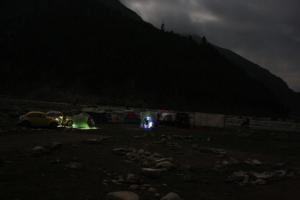 Our campsite with everyone settled in. 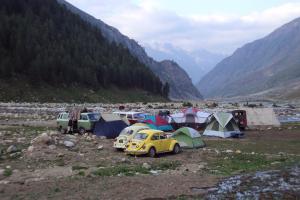 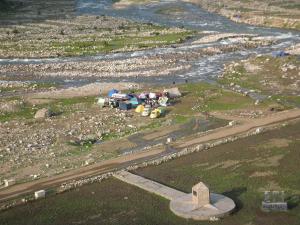 I climbed a hill in the morning to get this shot

emergency repairs on the brake reservoir

getting closer to the snow capped mountains…another view from my vantage point.

The temperatures plummeted to near freezing during the night and the proximity to the river did not make things any cozier. Tucked in our sleeping bags we slept like logs ( some might use the term ‘babies’ instead but whoever originally coined that phrase probably didn’t have babies or he would have known better) till the first light. The cooking team was hard at work preparing a hot breakfast. I’ve learnt it in my previous travels that the rough conditions of travel seem slightly less rough on a full stomach. It was also important as the next proper meal would be served at our destination.

Breaking camp ..getting ready for the day ahead

we were not the only ones who were hard at work

We broke camp, buried our organic garbage and packed our recyclable litter to dispose off properly at the next major town and steamed off. Washing up in the frigid waters of River Kunhar was another experience. I tell you, there is nothing better than an ice cold dip to…wake you up.
The group members had their cameras out and were clicking away merrily. They had to be herded to their cars as we wanted to cross the glacial streams as early as possible. (for reasons I mentioned in my first post) Digital cameras have made such a huge difference in our photographic habits. i remember carrying three or four rolls of films for an entire trip. Now I have a 32 GB memory card in my Canon and even then I carry an external hard drive to download the pictures each night before going to bed.
The brake fluid reservoir in my 1960 beetle had developed a small crack and brake fluid was seeping. It had already ruined the paint in a small patch behind the spare wheel but the team mechanic Khalid decided to tackle it. Armed with nothing more than a flat head screwdriver and an old plastic bag, he used the campfire to heat and apply the molten plastic to the seam and smoothed it out! I had meant to replace the brake reservoir when we got back but the repair has worked so well that I have not bothered. (maybe when I get round to repainting the damaged paint)
We rolled out of the campsite a little later than planned but made good progress. The agreed protocol was for everyone to drive together but exception was made for one car as we took turns to speed ahead till we found a good vantage point for the best photos. We crossed three glacial streams and even in the early hours the flow was quite intimidating. i’d hate to imagine what it would be like later in the day. 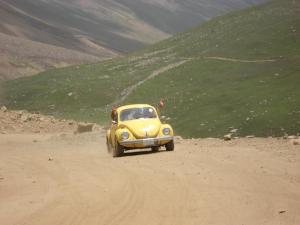 Stopping to fill our coolers with ice cold water. 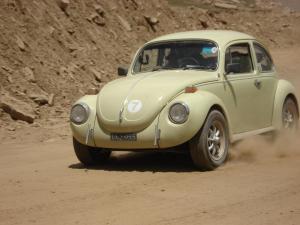 Mujahid Zafar’s, a businessman in his1302 super 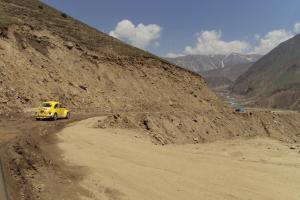 This track was actually quite comfortable compared to what lay ahead

Farhan Tariq – an I.T. student in his 1302 super crossing the glacial stream

Rehan Afzal, who owns a catering and hospitality business chain in his Vanagon Syncro. The set of horns you see are genuine male Yak ‘accessories’ from a previous expedition

It was just us and the 4 x 4’s with their diesel engines. Our humble air cooled motors shined that day.

Our recyclable litter in a bag, tied to the bumper till we could dispose off it responsibly 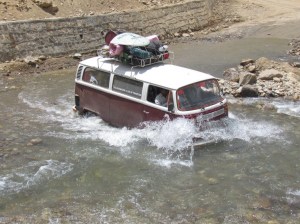 The tech team in their 1971 baywindow bus, loaded with a few tons of supplies

Lalusar lake greeted us after about two hours. It is the basic source of water for the Kunhar river and quite picturesque. The water was quite a distance from the road so we just took some pictures and carried on. We had already climbed to an altitude of more than 11,000 ft. from here on we were going to climb +2,500 ft in a matter of about 10 km or so. 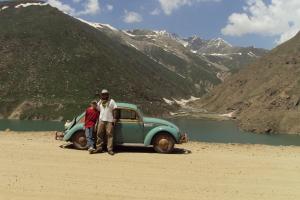 at Lalusar lake with Billo- my 1960 beetle and son. (Abdullah)

Another view of the Lalusar Lake

Do you think it is getting boring? same old water crossings, same old steep grades?..Are we there yet? Trust me, there wasn’t a dull moment as we maneuvered our cars past obstacles. It was literally a choice between going over  a sharp rock that could damage the tyre or the big round boulder that might leave a gash in the underbelly of our cars, deciding the position of each wheel in a split second so as not to break the momentum as we climbed rapidly. At that moment the drivers brains were like on-board computers fed information thru the eyes, analyzing the data in a split second and then directing the vehicle over the best possible (and least damaging) spot.

an obstacle course, a mine field? I doubt if Volkswagen tested their vehicles in these conditions before they were put in service..well we did it for them several decades later.

The next 10 or so km were pure torture. We climbed an insane grade dodging rocks and ruts maintaining the momentum. The co-drivers were always on the ready to jump out grab a rock and wedge it behind the rear wheel in case the engine ever stalled and the car started to roll backwards. We had good working parking brakes but the incline was such that we did not wish to take any chances. Every so often we would hear the gut wrenching thud and crunch as, despite all our efforts a rock would make contact with the lower most parts of the cars. Going thru one glacial stream I lost one of the tail pipes. Emerging at the other end I noticed the change in sound, stopped to inspect but the tail pipe was washed away by then and it was no point trying to look for it. Mujeeb’s ‘Grey matter’ took a bad hit on the crank case that almost ripped off the drain plate. two of the cars lost a headlight glass each after receiving direct hits from flying stones. (the rocks that pop out from under the wheels of the car in front or the vehicle passing going up or downhill) I was so glad Billo’s headlights were protected by simple but sturdy headlight protectors fabricated, especially as I had the $200 LED inserts loaned to me by a friend just for the trip. Despite all these minor setbacks we kept on going. The scenery was changing rapidly and for once we found that the mountain tops around us were not too high. Then the realization hit us. We were at the top!. The altimeter on the Garmin GPS read 13,721 ft.  We stopped to admire the scenery take pictures and share high fives…we had just reached the highest point in the Kaghan valley and done what has probably never been done by a Volkswagen in similar circumstances. The best thing is that all our cars were intact and had made it to the top without a hiccup. We had a plan if any of the cars broke down or found the steep climb too much to handle. The Syncro 4 x 4 would have towed the weaker link and we suspected it would be Mujeeb Mufti’s Grey Matter with its 1200 cc engine packed with everything but the kitchen sink and 3 occupants including the driver. Surprisingly Grey matter made it without any difficulty. She was ‘bleeding’ but still going strong. The wind was strong and the wind chill necessitated reaching in for the light jackets. We lined up the cars for a god group shot and while everyone wanted to spend more time here I managed to herd everyone into their cars and got going…We had a long way to go. 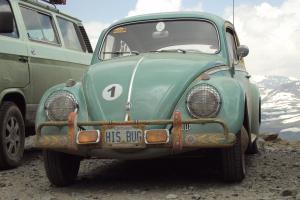 Billo with her headlight protectors

You know her well by now 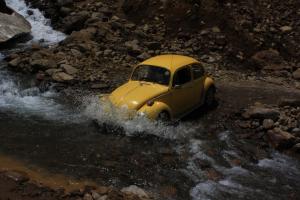 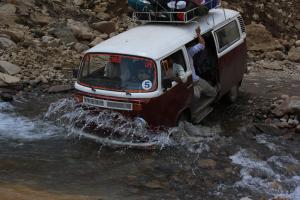 Another good shot captured by Mujeeb 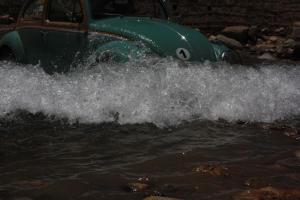 View from the top. The location of the polo ground is marked by the arrow 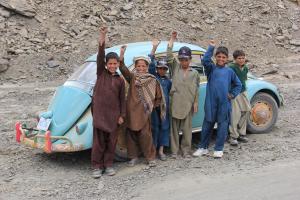 some local kids posing in front of Billo. I know of no other car that gives a better smile per mile average. 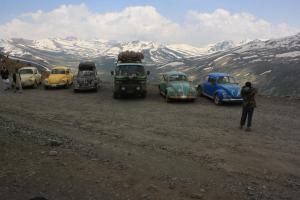 group picture of our rides

with the expedition participants

the usual suspects..without their rides